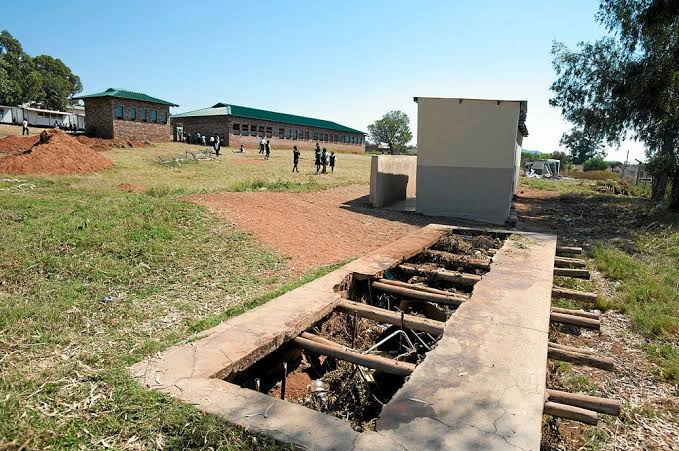 The Hawks made a foul sweep, arresting 10 individuals that collectively received more than a quarter of a million rand to build toilets in the Amathole municipality.

“…In 2016, the Daily Dispatch reported that the controversial project was taken over by the national department of water & sanitation. The initial project, funded through a R631m loan from the Development Bank of Southern Africa (DBSA), was scrapped after the municipality terminated a contract with Siyenza Group.

The Dispatch revealed that Siyenza was owned by a Butterworth-born businessman who allegedly had links with prominent politically connected individuals.

The newspaper reported at the time that the contract for the toilets was never advertised, despite its magnitude.

It also reported that the first batch of toilets, built before the contract was cancelled, started collapsing within weeks of being installed…”

The group is called “Siyenza”, an isiXhosa word meaning “We are doing it”. I chuckle to myself and wonder if, when they decided on their business name if this was somehow a subconscious admission of guilt?

South Africa’s, Eastern Cape has the most shocking statistics when it comes to the lack basic sanitation systems, especially in schools. At the end of 2018 Angie Motshegka admits that more than 4000 schools still use pit toilets despite the schools norms and standards making provision for sanitation facilities. Mrs. Motshegka hasn’t reached the 2016 deadline of norms and standards and a new deadline has been set for 2020.

Lack of sanitation facilities and the continual use of pit toilets presents, as always a host of problems. Unless there is an effort to install low flush, or dehydrating toilets we will continue to have full leach pits that are expensive and difficult to manage. Illnesses, such as intestinal worms and diarrhea and deaths related to open defecation and pit toilets will persist. Women will remain vulnerable to sexual harassment and rape when having to use lone pit toilets or the bushes to relieve themselves. Groundwater and underwater resources will persistently become contaminated too.

Remember back in February this year a contractor in the Eastern Cape built 9 pit toilets to the tune of nearly 5 million rand? Read more here: